Topics covered on this page:

This is the oldest form of the game, and it’s the easiest to play. It’s also the version that you’re most likely to find at an online casino. For anyone just starting out, this is the obvious place to begin. It’s simple to master, the rules aren’t complicated, and there are no fancy themes or features to distract you. The first step is to decide which numbers you want to pick. These are often called spots. If you can’t decide which ones to choose, you have the option of letting the computer pick them for you.

When you are playing, bear in mind that the amount of numbers chosen affects the overall odds, and that it can be more profitable to choose fewer rather than the maximum allowed. You’ll also have to decide how much you want to wager on your selection. Play then begins, and 20 numbers are drawn by the random number generator, (the RNG). The ones that land on the spots are referred to as catches, and you’ll be aiming to get as many of these as possible. 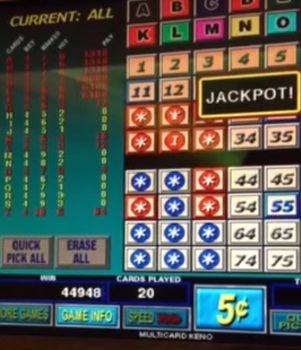 This is played much the same as the single card version. The difference is that you can play up to 20 cards at the same time in this variant. Naturally, this adds to the excitement, and it also provides the chance of obtaining higher winnings. Although keno is completely a game of chance, playing with lots of cards gives you the opportunity to apply a certain amount of keno strategy to the proceedings. You could select different numbers for each of them if you wanted.

For example, you could play 10 cards, and mark 5 different spots on each one. There will be a greater chance of you hitting one of them in the draw. You may also get a few lower payouts, as well. Alternatively, you could decide to allocate individual blocks or rows to each of the cards. It’s pretty common for the numbers to fall in sequences, so this method may prove successful.

There is another technique, which is known as overlapping. This system means that a few of the numbers chosen on one card are repeated on the next, and then some new ones complete the selection. For example, on the first card, you select 2, 4, 6, 8, and 10. On the second, you pick 8, 10, 12, 14, and 16. On the third, you go for 14, 16, 18, 20, and 22. Although it may seem as though this tactic will net you the most hits, in reality, the opposite is true. When the spots are overlapped in this way, you are actually lessening the chances of winning.

This is a variant that provides players with the chance of winning a significant amount of money. This tends to be a progressive version, and so the prize fund steadily increases as more players participate in the game and place their wagers. Usually, a maximum bet will be required in order to be eligible for playing for the big win, but if you get lucky, you could be in for millions of dollars. One very fortunate player of a particular keno jackpot game recently won $1.9 million!

There are several other quirkier takes on the basic game of keno, and when you’re browsing through the online keno casinos, you may come across a few of them. Even if you’ve already secured a particular favorite within this category, you may like to check out some of these alternatives. It is sometimes more rewarding to mix the playing choices up a little, and to go for something else, once in a while. 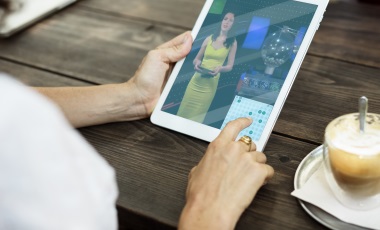 If you’re a fan of the live dealer games, the good news is that you will be able to enjoy a few rounds of keno in this format, too. The provider for this is Ezugi, a name that has become renowned for producing high-quality live casino games. This version is streamed directly to you from the company’s studios in Latvia, and the game will be presented by one of the professional dealers. The key difference is that a random generator isn’t used. Instead, the winning numbers are pulled through the tube of the hopper and are collected by the dealers. You will be able to watch in real time as the numbers are drawn, although the computer interface will still mark them off for you on your card.

Mobile Keno Allows You to Enjoy Your Games Wherever You Want!

Keno can be enjoyed at plenty of land-based and online casinos, but what if you want to keep playing while you’re on the move? Well, it’s now possible to do so. You can access all of your casino favorites, including keno, with a wide range of handheld devices. The games are available in a format that’s compatible with the majority of smartphones and tablets. Mobile platforms have become the preferred choice for many of today’s online gamblers. Recent figures indicate that more than $10 billion is wagered annually by players who are using this particular playing method.

Playing Keno on a Mobile Device

In terms of keno, it tends to be the classic version of the game that is listed, but you may also find a few variants if you look around a bit. The playing style isn’t significantly different to playing on a desktop. You just have to use the touchscreen to select your numbers, and the winning ones will be drawn automatically. The simplicity of the gameplay really suits the smaller screen. At many of the online casinos, you will be given the option of downloading a native app or using the in-browser version. It’s worth checking which of these has the most variants of keno listed before you make your definitive decision.

Keno is one of the few games that is down to pure luck. It involves players selecting a set of numbers and then waiting to see which ones are chosen during the draw. Many people wonder how the computer makes its selection. Well, this is all due to a clever software program, which spits out the numbers in an arbitrary fashion. There are different types of RNGs, but the ones used by online casinos are called Pseudo Random Number Generators. No external output is needed to produce a result in these versions. Instead, the software uses an algorithm and a seed number. These seed numbers and the results are produced at lightning speed, and new ones are selected every millisecond.

The process involves the last number, or sequence of numbers, being picked. These are then subjected to a certain mathematical operation (subtraction, addition, division, or multiplication) and a new random outcome is created. This is then repeated over and over again. Casinos use RNGs for all the virtual games offered. Many of the land-based establishments use them, too. This is often the case for virtual blackjack and roulette games, as well as for the video slot machines, video poker and keno games.

The Background to Random Number Generators

Random Number Generators have been around for almost half a century and were first used in electronic slots machines. The computer chips contained within the machines allowed random results to be created without the need for a mechanical reel. The software contained within the chip would run an algorithm and would produce a result. Every possible outcome was given its own number designation. Those with a higher probability were given multiple numbers, and the rarest were given a few, possibly even one.

RNGs allowed games designers to create more complex slots, and made it possible to have more than the traditional three reels. All the new technology being used in casinos also allowed for the introduction of progressive jackpots. When keno first arrived in the US, the draws were made using lottery or bingo style balls. At first, these were painted with the traditional Chinese characters but were quickly replaced with numbers. The balls were drawn out of a hopper or some other kind of randomizing container. These included a rabbit ear blower, an automated blower, and a spinning metal ball cage.

At first, keno may seem a fairly standard game, but there are actually a number of different versions to enjoy. Obviously, these are very similar in terms of overall style, but you will still have plenty of playing quirks to keep you interested. The good thing about this particular category is the rate of play. Every round is conducted at speed, so you’ll see your winnings registering on the screen immediately. It can also be fun to try out a few of the different strategies. If you’ve been playing keno for a while and want to try something new, we’d advise you to look for demo games before playing for real money. There are plenty of them to choose from, and these can be the perfect opportunity to try before you buy, and to get in some additional practice.

Most certainly this is our favorite casino at the moment! Check out the full review to learn why we ranked it so high!

Our experts go in depth to help you make your choice!